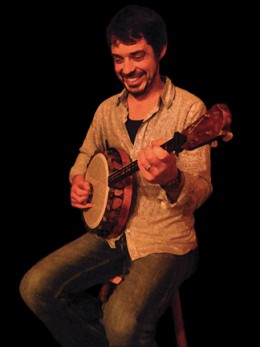 'The Space Between the Notes'

Colm Naughton is a renowned banjo and mandolin player from Creggs in North-East Galway. He started playing music at an early age which was inevitable, growing up in a large family of musicians. He spent a number of years in Galway as a session musician playing in venues such as The Crane, Tigh Coilí, Tigh Neachtain and Taaffe's, and it was in these venues he met and was influenced by many of the great modern day musicians.
Also, in his time in Galway, Colm was involved in setting up and running the Galway School of Irish Traditional Music, where he was the resident banjo & mandolin tutor. He has toured Ireland, the U.S. and Europe with various different groups, including String Company, Fuaim Chonamara and John Beag Ó Flátharta. Currently, Colm can be seen playing regularly as a two piece with Matt Keane.

This is Colm's debut solo album and is mainly Irish traditional with driving reels, laid-back
barndances and lilting jigs, but also dips into other cultures for a set of Spanish muñeiras
here or an American folk song there. Adding another dimension to the mix, Colm has
included two of his own compositions.

This will be a night of music and song where the tracks on this recording will be brought to
life to celebrate the release of this extraordinary new CD. On the night Colm will be joined
on stage by Pat Coyne, Jimmy Higgins and Finbarr Naughton with special guests Matt
Keane, Sean Keane, Orlaith Keane, Máirtín O'Connor and many more.

“I've always known Colm as a very accomplished and versatile banjo and mandolin player.
On this recording, his playing is, as always, rich, full bodied and full of heart.... I wish him
every success and hope that his recording captivates other listeners as much as it has
done me.” - Máirtín O'Connor