HEART OF A LION

Heart of a Lion is the story of a Finnish white supremacist who finds his prejudices challenged when he falls in love with a woman who has a bi-racial child. It is a complex story, dark at times but balanced with great humour and love. Fantastic performances at its centre and brilliant direction from Dome Karukoski.

Aided by an outstanding cast, this is the kind of bitter-sweet drama that the Danes do so well. The film centres around a group of friends all either in love, out of love or looking for love. Director May el-Toukhy has delivered a really clever, funny picture, full of warmth and charm.

LOVE IS ALL YOU NEED

IN ORDER OF DISAPPEARANCE

When snow-plougher Nils is awarded Citizen Of The Year, it seems like this quiet, gentle man has somehow reached the peak of his career. However the murder of his son sets off a series of events which utterly transforms him and pulls him into a circle of ever escalating violence. A brilliant dark comedy; Stellan Skarsgård is outstanding in the central role of Nils.

Actor Gijs Naber shines as Thijs, a slacker in his mid-20s, utterly unsure about his life, or what to do with it. He has had love and lost it, had career opportunities and squandered them; he has a doting mother, who he can’t relate to and a flat mate who he can’t bear to live with. In fact, he just can’t fit in with what modern life has to offer him. Against the odds, he finds a spark in a most unexpected relationship.

Already deemed a modern classic, A Prophet is a blisteringly powerful film from French directing genius Jacques Audiard. Considered by some as one of the best crime films of all time, this is an arresting, gripping and violent gangster pic for the ages.

Status: Single received its world premiere in November at SUBTITLE in Kilkenny. Russian star Danila Kozlovsky plays a stand-up comedian who is convinced that he has finally met his true love; unfortunately it turns out the feelings are not reciprocated and the movie charts the extraordinary lengths to which he goes to win her heart. 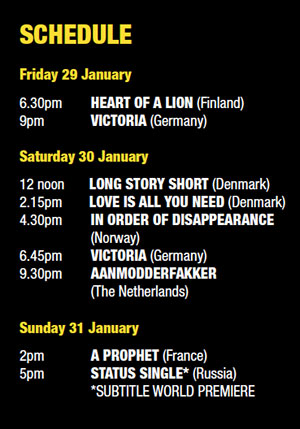