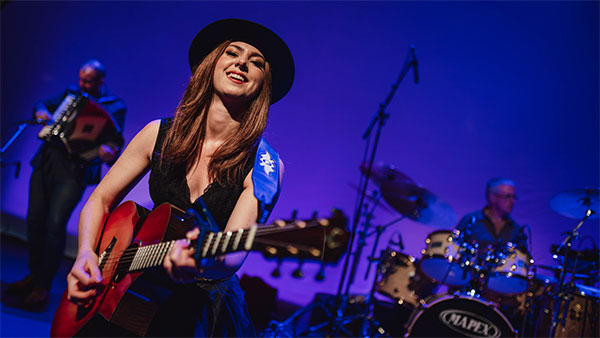 TG4 will this weekend broadcast a concert by German born, Irish based singer-songwriter Sina Theil which was recorded at the Town Hall Theatre in December 2020 during lockdown.

‘’Sina Theil Live at the Town Hall Theatre’’ will be broadcast on Saturday 4th of February and will also be available worldwide via the TG4 online player at https://www.tg4.ie/en/player/watch-live/

Sina Theil is making waves - and is one of the most energetic, passionate and hardest-working artists - on the Irish music scene. She is currently touring the island of Ireland as special guest with rising folk sensation Dan McCabe. Sina has been awarded “Hottest Act in Irish Country Music (female)” and “Song of the Year” at the Hot Country TV Awards and “Rising Star of the Year 2022” awards at the American Celtic Listener Supported Music Awards and has scored 17 number one singles in the Irish Country Charts and a number one in the main Irish charts with her latest self-penned song. After relocating to Ireland in 2015 by herself in an act of blind faith to pursue her dream of making music, Sina started funding her musical education through busking on the streets of Dublin; sometimes making just enough in the morning to cover bills that had to be paid in the afternoon. About her brave decision to uproot her secure life in 2015 to leap into adventure on the Emerald Isle Sina said: “To be honest, it was a complete act of faith. All odds were against me; I didn’t know anyone in Ireland, had no social media, very little money and never even played a professional gig! But I had that burning desire and dream...”

Sina’s independently released album “Live at THT Galway” for which she crowdfunded over €16,000 with the help of her loyal (50,000+) online following, scored her a no.3 in the main Irish Charts ahead of global superstars to the likes of Ed Sheeran. Her songs have been heard by close to 33 million Irish radio listeners. To find out more about Sina or purchase a signed copy of her latest album and DVD “Live at THT Galway” please visit www.sinatheilmusic.com or social media (@sinatheilmusic).

With the support of the Arts Council and as an important part of its response to the Covid-19 pandemic, the Town Hall Theatre installed cameras and streaming equipment during lockdown. The equipment - four high-powered cameras, which can be operated by a single user, and which stream in HD, and two live switchers (one which allows the programme to be archived as well as capture each individual camera angle, the second which allows for additional cameras to be added for large scale shoots) offer maximum flexibility for the venue and performers. The equipment enhanced the venue’s capacity to stream live and pre-recorded events and thus enabled the venue to keep in touch with audiences and create important work opportunities for artists and arts workers, and reduce recurring streaming costs to sustainable levels.

Following a string of sell-out events in January (thank you, Galway!), Town Hall Theatre Galway has lots to offer in February and March including:

For tickets to all these events - and more - visit www.tht.ie

Limerick woman Maeve McGrath has been named as the new Director of Programming for Galway Film Fleadh, taking over from Will Fitzgerald. She will be responsible for curating this year’s festival, which will run from July 11-16.

Following a hectic New Year and a string of sell out events in the first fortnight of 2023, Town Hall Theatre Galway has lots to offer for the remainder of January, and in February and March including: