Having left the village of Moylough for New York in her teens, Bridie Higgins spent time as a nun, became a teacher who specialised in the schooling of teenage cancer patients and was awarded New York's ‘Irish Person Of The Year’.
Leo Moran and Padraig Stevens

Maisie Gallagher is a formidable woman of sharp wit and intelligence who navigates the seas of life with her courage and strong spirit.
Maria Tivnan and Oisin Robbins

Sr. Madeleine Houlihan (89) is a Presentation Sister and lives in St Mary's in Shantalla. She is a teacher and an artist.
Emma O'Grady

Eva's Echo were delighted to tell the story of Steven Simmons, an infectiously positive and strong minded young lad who has remained resilient in his positivity through hardship and adversity.
Rena Bryson and Hazel Doolan

Bringing it all Back Home

Funded by Creative Ireland and Galway City Council, ‘Bringing It All Back Home’ is a series of short-form digital pieces (each 6-15 minutes long) created by a panel of Galway-based artists who have engaged with residents in Nursing Homes and Care Centres across the city and county this summer and researched, wrote and presented digital pieces inspired by those engagements. The vignettes will be broadcast on social media and digital platforms in the coming weeks, commencing Thursday 1 October.

Town Hall Theatre released the first 5 videos in early October, with the remaining 5 to be released in late October.

This unique intergenerational initiative, created to shine a light on older citizens affected by the lockdown, was initially designed to show collective support for older citizens and the people who care for them, especially in times of crisis. The outbreak of Covid-19 earlier this year was a source of significant stress, worry and perhaps even fear for many older people and the restrictive measures put in place to deal with the crisis - particularly in Nursing Homes - increased the social isolation experienced by many. As the project progressed, it expanded to include people living outside of care home settings and also others deeply affected by the lockdown.

At the beginning of the summer, the Town Hall Theatre invited a number of Nursing Homes and Care Centres in Galway, Moycullen, Oranmore, Corandulla, Clarinbridge and Tuam to nominate a resident to interact with one of a panel of local theatre makers, musicians and writers. The artists then connected (via phone or Zoom or in some instances, via safe visits) with the resident and with the resident’s family, listening to their stories and then creating a unique series of short-form vignettes for broadcast on social media and digital platforms. The digital stories feature a diverse range of subjects, from recent experiences to fond if distant memories of childhood and varied lifetimes.

The panel of artists working on the project include:

Town Hall Theatre is proudly funded by the Arts Council. Bringing it all Back Home is funded Galway City Council’s Creative Ireland Funding as part of the Irish Government’s campaign, Getting Through Covid-19 Together, which aims to support people through the restrictive measures that have been put in place to deal with the C-19 crisis. The campaign emphasises the importance of collective support and staying connected to others, and while all of us are experiencing different concerns, it highlights: “no matter what you’re going through, let’s stay connected and make it through, together”.

The initiative is being run in association with Backstage Theatre Longford (who were the original architects of the project) and the Pavilion Theatre in Dun Laoghaire, and was co-ordinated by Oranmore-based freelance director of theatre and radio, Maisie Lee. The Town Hall Theatre expressed gratitude to the project’s funders Creative Ireland and Galway City Council, all of the participating artists and especially to the residents and their carers. 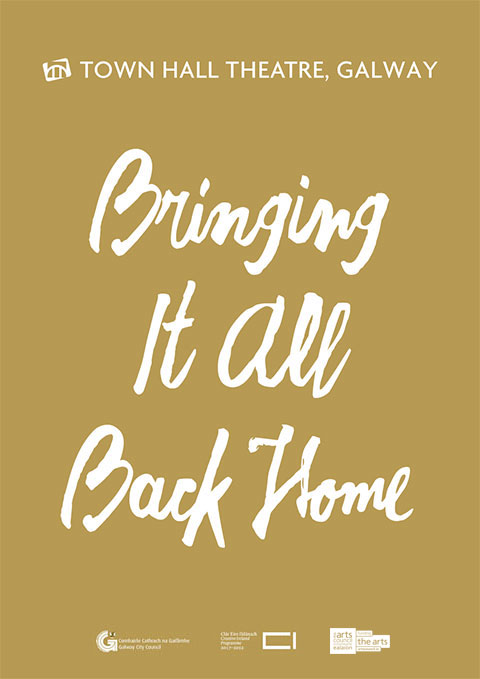